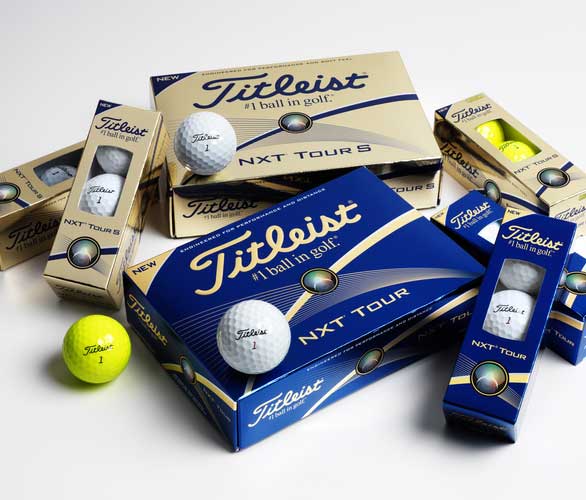 More than 34,000 golfers from around the world participated in the white box testing and validation process for new NXT Tour, NXT Tour S and Velocity, with golfers receiving prototype golf balls for on-course evaluation. Player feedback was then gathered through Team Titleist and shared with Titleist R&D.

New NXT Tour for 2016
Engineered for high performance and distance, new Titleist NXT Tour is designed using advanced multi-component technology to provide even longer distance with excellent scoring performance and soft feel. NXT Tour’s dual core has been reengineered with a larger center that lowers driver and iron spin while delivering fast ball speed for more distance. A soft, thin Fusablend cover, pioneered by Titleist R&D, maintains NXT Tour’s excellent scoring performance with shot stopping control into and around the green. A spherically tiled 302 octahedral dimple design with shallower edge angles delivers a higher ball flight (than NXT Tour S) with a deep downrange peak trajectory.
“Performance can be measured with robots and instruments, but ultimately we measure our performance by the feedback we receive from golfers. And those golfers asked us to deliver an even longer NXT Tour,” said Matt Hogge, Titleist Golf Ball R&D’s Director of Product Implementation. “The challenge for R&D was in reengineering the technology to increase distance while retaining the exceptional scoring performance that these golfers rely on. When you look at the dual core technology of NXT Tour, one of the critical elements is the relationship of the softer inner core to the firmer outer core. We’ve increased the size of that softer center so that by volume it’s about 66 percent larger. That’s a significant change which allowed us to knock down spin on full shots for longer distance. When you combine that with our thin, soft Fusablend cover, you also get great performance on shots into and around the green, the shots that really matter the most for scoring.”

New NXT Tour S for 2016
Softer from core to cover, new Titleist NXT Tour S golf ball is designed for players seeking the tee-to-green performance of NXT Tour – outstanding distance, consistent flight and excellent short-game control – with a significantly softer compression feel. New NXT Tour S has been reengineered with an even softer compression core and softer Fusablend, resulting in the softest-feeling NXT Tour S ever. A spherically tiled 302 octahedral dimple design delivers a piercing and stable ball flight.
NXT Tour S is available in both White and High Optic Yellow.
“Golfers that play NXT Tour S value very soft feel, and they still want Titleist performance. They want to hit it long off the tee and have great control around the greens. For 2016, our design goal was to further differentiate NXT Tour S from NXT Tour in terms of feel, while still delivering on those performance expectations,” said Scott Cooper, Titleist R&D’s Product Development Manager. “With new NXT Tour S, we’ve reformulated the core to be lower in compression so it will feel softer. We’ve also softened the cover by increasing the percentage of the softening agent used in the cover formulation. The cover is soft but it’s also durable, and it’s exclusive to Titleist. We call it Fusablend. It’s engineered to be soft and thin, which contributes to the ball’s exceptional short game spin. Unlike thermoplastic urethanes (TPU) which most of our competitors use, our cover feels soft on all shots rather than clicky.”

New Velocity for 2016
Titleist R&D has reengineered the new Velocity golf ball to deliver even more explosive distance on all full swing shots while providing a more playable feel in the short game. New Velocity is designed with a larger, faster LSX core that produces higher ball speed for more distance. The low spin construction and 328 dimples in a spherically-tiled tetrahedral design deliver a soaring, penetrating ball flight that produces long carry distance with more rollout. A thinner NAZ2 cover combines with the larger core to deliver more playable greenside feel.
Velocity is available in single (#1, 2, 3, 4) and double-digit (#00, 22, 77, 99) play numbers. The double-digit play numbers were selected based on their popularity among members of Team Titleist (www.titleist.com.au/teamtitleist).
“The core is the engine of the golf ball. We’ve made the core of the new Velocity even larger – it’s now 1.575 inches in diameter. A larger core means a thinner cover. That combination gives Velocity great ball speed. Add in Velocity’s aerodynamic package and you have an incredible formula for distance,” Hogge said. “But this is still a Titleist golf ball – and every golf ball we design is about tee-to-green performance. While Velocity is built for distance in the long game, it also launches high with a steep angle of descent, which help golfers who don’t generate a lot of short game spin stop the ball close to the pin. The thinner cover also provides a more playable feel. All of these benefits will help golfers feel more confident from tee to green.” 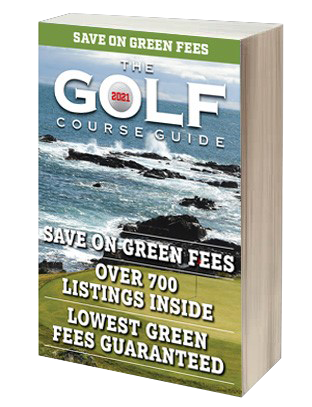 OUT NOW!
Order the 2021
GOLF Course Guide
and SAVE on green fees!